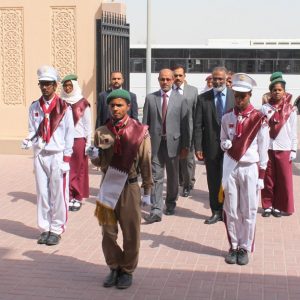 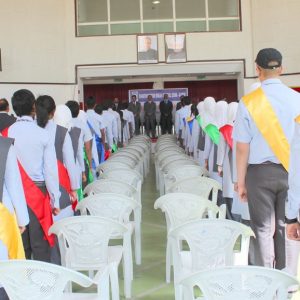 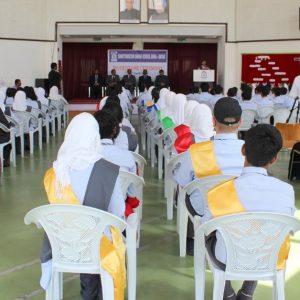 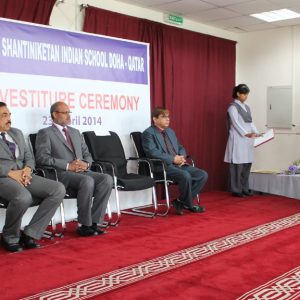 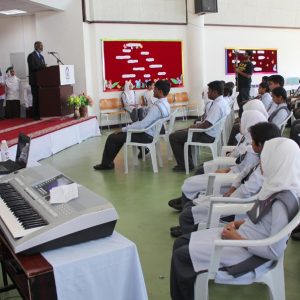 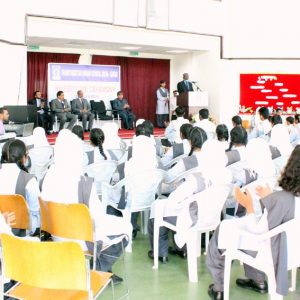 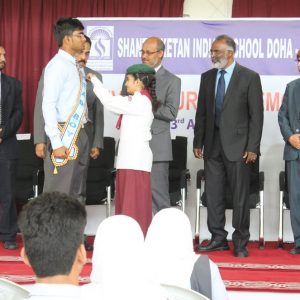 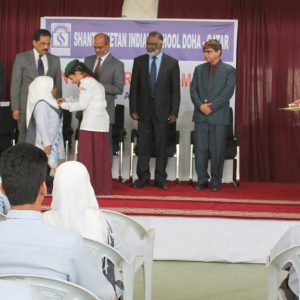 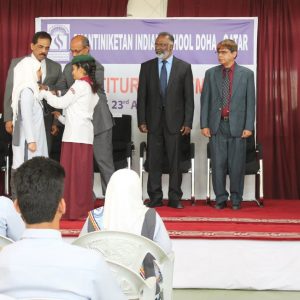 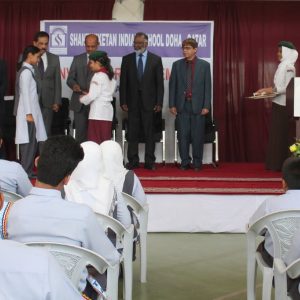 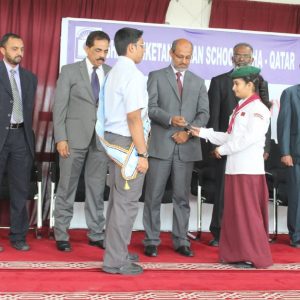 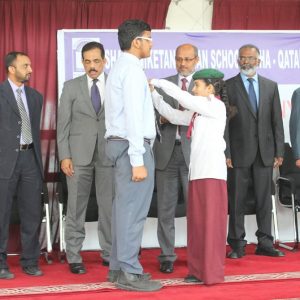 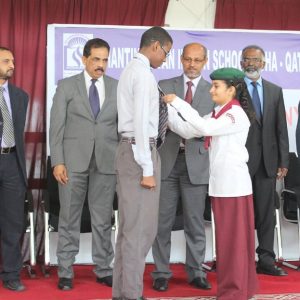 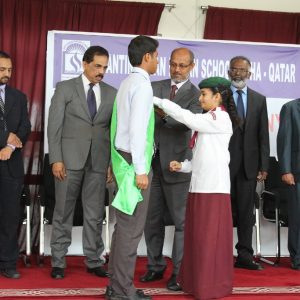 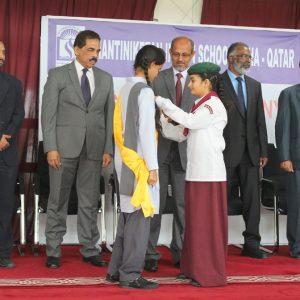 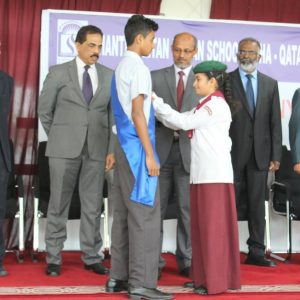 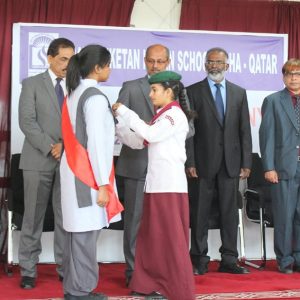 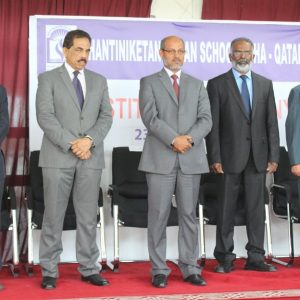 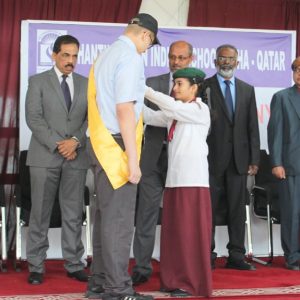 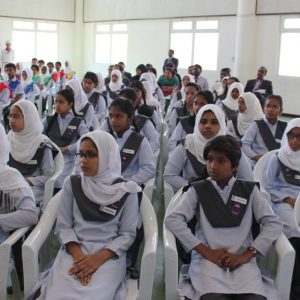 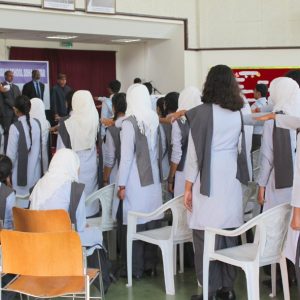 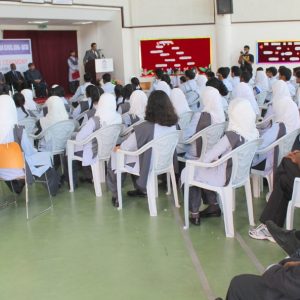 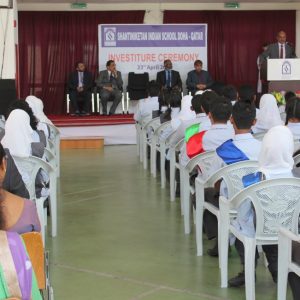 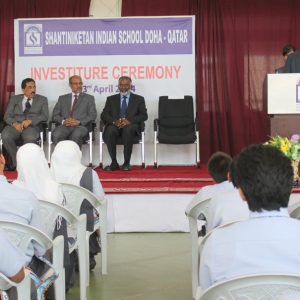 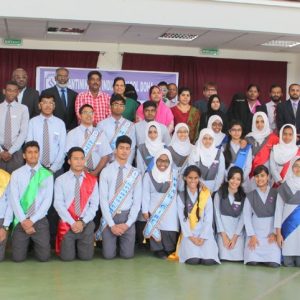 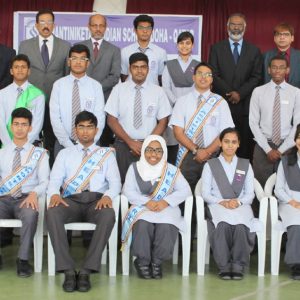 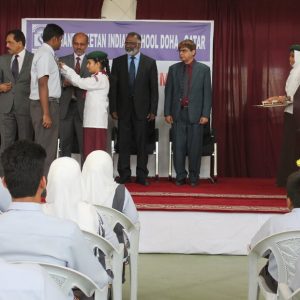 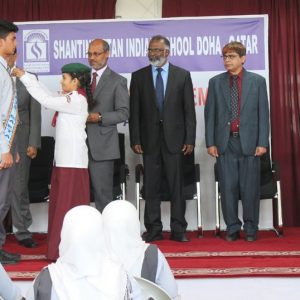 23rd April, 2014, the most coveted day for the trail blazers, the leaders, the innovators, role models, and the chosen ones upholding the values of the school, finally arrived and the Investiture Ceremony was held at the School Activity Hall with great enthusiasm and spirit.

In the glorious summer morning, the crowds of excited students, proud parents and respected senior teachers of Shantiniketan Indian School, assembled for the Investiture Ceremony, to celebrate the accomplishments and achievements that all students of the SISians could be proud of.

The programme began with the Principal accompanying the Guest-in-Chief , Mr. K. C. Abdul Lateef and the Guest of Honour, Mr. Abdul Kadar  into the Activity Hall, followed by the newly appointed Student Council Members.

Hosted by the former Head girl, Shilpa Susan Samuel of Class XII, the event began with a recitation from the Holy Quran. The Choir presented a song prepared by the Music teacher, Mr. Derryck Messey.

Our revered Principal Mr. Subhash Nair addressed the Welcome Speech and inspired the students to blend their heart and head to make the school a ‘Symbol of Innovation’. He told the students that investing these responsibilities, the school has provided them an opportunity to imbibe in them the true qualities of leadership that can help them to blossom as global citizens and meet all challenges in their life.

Mr. Tanvir Mehndi, the Head of the Department of Physical Education, conducted the oath taking ceremony followed by the choir singing the School Song.

Speaking on the occasion, Mr. Abdul Kadar, congratulated the newly appointed Student Council Members and pepped them up to shoulder responsibility with actions and bring out positive results in all areas.

In his address to the newly appointed torch bearers of the school, Mr. K. C. Abdul Lateef, reminded the students that they have not been appointed to be leaders within the boundaries of the school but to be great leaders of future around the globe.

He also discussed the ‘Selection Procedure’ which started in the month of February. The shortlisting of the candidates were based on the scholastics and co-scholastic performances of the students for the last three years and nominations of candidates from the seniors and teachers from different classes.

The entire process starting from nomination, self-nominations, screening by a panel of judges comprising the Principal, Vice-Principals, HODs and Senior Teachers to ensure complete transparency in the selection process. The shortlisted students then had to go through a series of tests to prove their personality and skills required for the coveted positions.

He also promised to extend all support from the school to the students at any point to achieve ‘excellence with uniqueness’ in all areas leading to professional development.

Mr. Dudley O’Connor, Vice Principal of CBSE(i) Wing of Shantiniketan Indian School, proposed the vote of thanks. The programme came to a close with the National Anthems of Qatar and India

The ceremony gave the parents a chance to develop a deeper appreciation for their children and greater respect for the school. The school extends its best wishes to all the newly appointed Council Members.

It also turned out to be a memorable occasion for the young leaders as they looked forward to a new and enriching academic session.