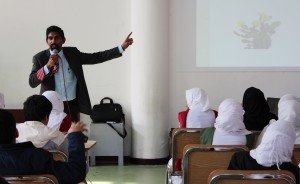 Spreading the message of changing attitude for a better destiny-the need of the hour, the Departments of Moral Science and Islamic Studies at Shantiniketan Indian School collaboratly conducted moral awareness class for the students of the senior wing, recently on the school premises. The event was organized as a part of the campaign on attaining a value and skill based society.

The session was attended by Dr.Subhash Nair, Principal, who, in his inaugural address, urged the student community to rise to the expectation of the society. He also reminded the audience of building a better world where people live with moral values.

The event witnesses a mind blowing and enlightening class on ‘Change your attitude; create your destiny’ with the support of visual presentation. The class was handled by Mr. Varghese Mappan who captivated the students by his thought provoking words. The class was followed by a thematic role play by the students who depicted various human character traits featuring each one’s specialty. Another attraction of the day was the symbolic presentation by the students representing each nation. Clad in suit of the traditional dress of each country, the demonstrators spread the message of unity in diversity.

Mr. Jaseer Sagar welcomed the gathering and Mr. Jasmir Faisal proposed the vote of thanks.Mrs.prabha Saji, HM, Middle Section, and Mr.Raheem Bavakhan, head of the department, were also present on the occasion.