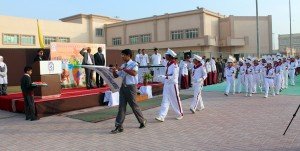 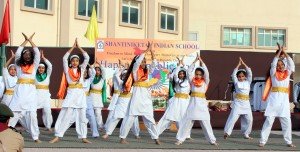 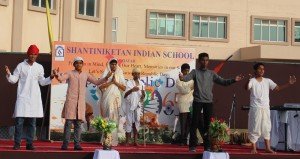 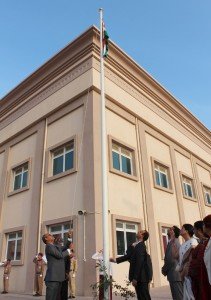 Aura of patriotism prevailed everywhere on the premises of Shantiniketan Indian School when it marked India’s 65th Republic Day with zest and fervour in the general assembly ground of its Barwa Campus.

The function began with prayer followed by a spectacular ceremonial parade, pageantry and procession. Students from various sections gathered for the Republic Day parade. There were different scout groups who represented the Marine Grenadiers, Parachute Regiment, Brigade of Guards and Mahar Regiment.

Mr. KC Abdul Latheef, President of School Management Committee, Chief Guest of the Day, extended his warm greeting on the occasion and quoted words of President of India stressing on values. “SIS is always committed to values and it is our slogan to excel with uniqueness in all areas, including promoting the values,” he added. He also requested the SIS family to read and understand the values from the speech of the President and to take an oath to support it throughout their lives.

The whole campus reverberated with slogans of ‘Jai Hind’ and ‘Vande Mata ram’ as the students showcased a vista of colourful events. The students took pride in glorifying and celebrating the spirit of unity. Centered on the theme ‘unity in diversity’, the students presented an impressive dance and procession representing the culture and tradition of different states and evoked a sense of oneness among the audience. The stage came alive with the vibrant hues of different states and their culture and tradition.

It was a visual treat for the spectators as the tiny tots stepped for a scintillating dance performance titled ‘We are one’. Students also exhibited their inborn talent and potential presenting a cultural extravaganza which included thematic fusion dance, mime, patriotic song, speech and group songs which left the audience spell bound. The whole event came to an end binding everyone in a thread of patriotism. The programme was successful in instilling love for the country.

It was an ecstatic moment as the Principal of the school Dr. Subhash B Nair laid stress upon the duties and responsibilities of the students towards the progress of the nation. He also reminded the audience of taking a pledge and rededicating themselves to uphold the traditions and values of the country cherishing the culture.

“It is inevitable that we understand our tradition well because ours is a pluralistic society. Each members of SIS family has to keep the unity in diversity”, he urged.  Another group of students from SIS took part in the Republic Day Celebrations organized at the Indian Embassy.