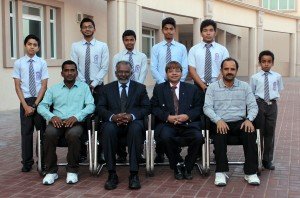 Students from across the country had participated in the event. A team of 6 students represented SIS where in Mohammed Hani Diban, Aditya Anil Nair, Aniket Anil Nair and Mishal Ramesh Saliah emerged champions in various categories while Imaaduddin Ansari and Hussain Ameen bagged second and third positions respectively.

The participants and the trainer Mr. Ram Kishore Sharma were appreciated and honoured for the glory brought to the school.