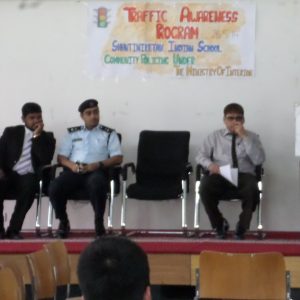 Due to an immense increase in the number of vehicles that zoom across the roads in Qatar, the roads of Doha has recorded a large number of deaths due to road accidents. In its effort to create awareness about traffic safety, Community Policing, under the Ministry of Interior, conducted a seminar on Traffic Awareness at Shantiniketan Indian School, Doha on May, 26th, 2014.

It was a wonderful experience for the students of SIS as they were attuned with the Traffic Rules followed in the country. Lt. Col Arif Abdul Rahman was the Guest-in-chief on the occasion. Addressing to the young students, he explained about the needs of awareness among the students and role they can play in reducing the number of accidents caused on roads. He also spoke about the Community Policing, which is all about providing security and help to the people at their door steps. He made it clear that people do not even need to go to the police station for reporting an incident. Their service to the community would be prompt and just a call away.

Later, Mr. Fasial Al Hudawi, the coordinator of the Community Reach out office of the Public Relation Department of the Ministry of Interior, presented before the students the set of traffic rules that people to need to follow and maintain while driving in Qatar. It was a highly interactive session during which the Students showed a high sense of awareness and also got the opportunity to learn many set of rules that are mandatory for driving. Many students won prizes for answering the questions correctly.

The teachers also showed a keen interest in the session as they would be highly benefited in the endeavour to procure driving license. Mr. Dudley O’Connor, Vice Principal CBSE (i) also spoke on the occasion and explained the necessity of traffic awareness among the youths.

Mr. Adam Shaikh, who was the chief Coordinator of the program, was thanked by the officials of the ministry of Interior for organizing this Traffic Awareness Program.